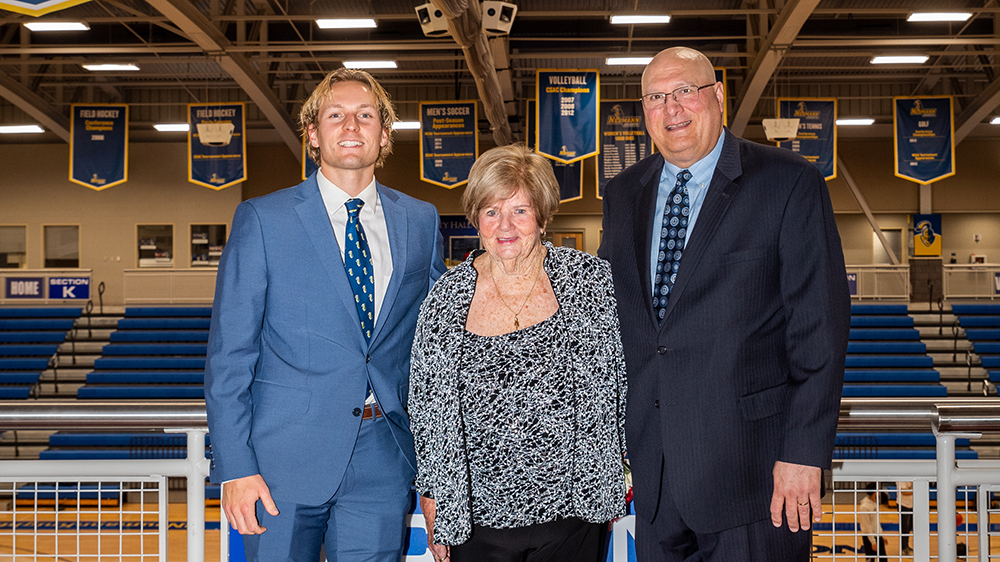 Dozens of donors filled the Bayada Atrium on the evening of November 18 for the President’s Thanksgiving Reception, Neumann’s annual event that recognizes supporters for their continued generosity and commitment to the university.

Special honorees at the 2021 event were the Brendan P. Kelly ’87 Committee and the Kelly family.

Brendan Kelly, a member of the Neumann University class of 1987, died in December 1988. Two years after his death, his friends and family launched the Brendan P. Kelly ’87 Memorial Scholarship with the blessing of Sharon Kelly, Brendan’s mother. In the past 31 years, the fund has grown to more than $425,000 and has supported 90 Neumann students.

According to President Chris Domes, “Fundraising in Brendan’s name began after his passing with grassroots efforts, including basketball tournaments, beef and beers, personal donations, t-shirt sales, golf outings, and social events to cement Brendan’s legacy in an institution that  embraced him wholeheartedly."

Conner Kolek, senior marketing major and a recipient of the Kelly Scholarship, spoke to the crowd about what the financial assistance has meant to him.

“This scholarship, along with working jobs throughout my college experience, has made it possible for me to graduate with no student loans,” Kolek told the crowd, eliciting enthusiastic applause. “I am so grateful to the Kelly family and the Brendan P. Kelly Scholarship Committee for this humbling award. My college career would not have been the same without you.”

“I would like to thank Mrs. Kelly and the entire Kelly Family for sharing Brendan with us while he attended Neumann,” Kern said. “Brendan was a good friend and teammate to all of us, and we loved him very much. His personality was larger than life."

Because of their love for Brendan Kelly, his family and friends have forever etched his presence in Neumann's history by assisting scores of students in achieving their dream of a college education.