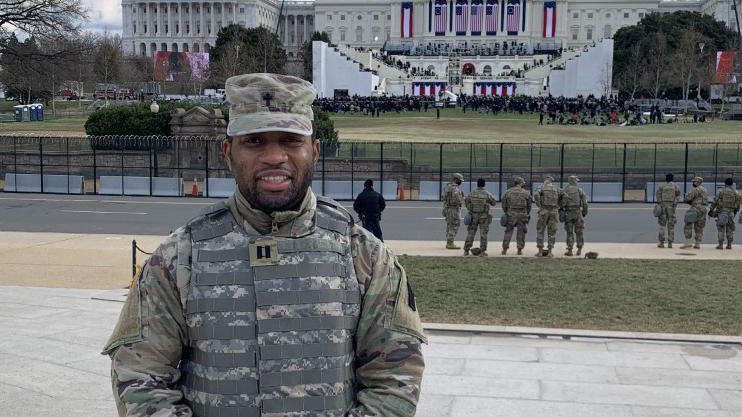 Neumann University was well represented at President Biden’s January 20 inauguration thanks to Dontae Phillips ’10 a Maryland National Guard member. Phillips was deployed to Washington, D.C., for inauguration day and spent several weeks protecting the capital city during and after the ceremony.

Phillips joined the 25,000 National Guard troops that were in Washington on inauguration day. It was a day he will not soon forget.

“It was a very peaceful transfer of power,” Phillips said. “I was actually able to see President Biden sworn in, and I was moved by his speech. I was awestruck to witness this historic moment. It was a humbling experience for me.”

“As a chaplain, I cannot bear arms. We don’t want to seem hostile, but we have a religious affairs specialist accompanying us and they carry a weapon to protect us from hurt, harm, or danger,” he explained.

Phillips experienced much gratitude from elected officials, such as senators and representatives, for providing protection during the inaugural festivities. The events of the January 6 insurrection were still very fresh in the minds of these officials.

“I thought I would be home on my couch watching the inauguration. I would have never imagined that I would actually be there,” said Philips, who got a wave from President Biden as his motorcade drove past.

Phillip’s most recent assignment has been to support the state of Maryland’s COVID-19 vaccination efforts. He and his fellow soldiers are manning sites in Bowie, Maryland, to assist the medical professionals administering the shots.

Phillips, who received his master’s in Public Administration from Villanova University, his master’s of Divinity from Princeton Theological Seminary, and is currently working on his doctorate in Language, Literacy & Culture from the University of Maryland, plans on transitioning from his religious ministry to the political arena. In addition, he has completed phase one of the Captain’s Career Course program which will enable him to become a major after completing phase two.

“I love the ministry, but I also like being outside of the pulpit when the decisions are being made. My ultimate goal is to run for political office in Maryland,” said Phillips, who has his sights set on the governor’s office!

While at Neumann University, Phillips was student body president for two terms. He credits that experience with sparking his interest in public service.