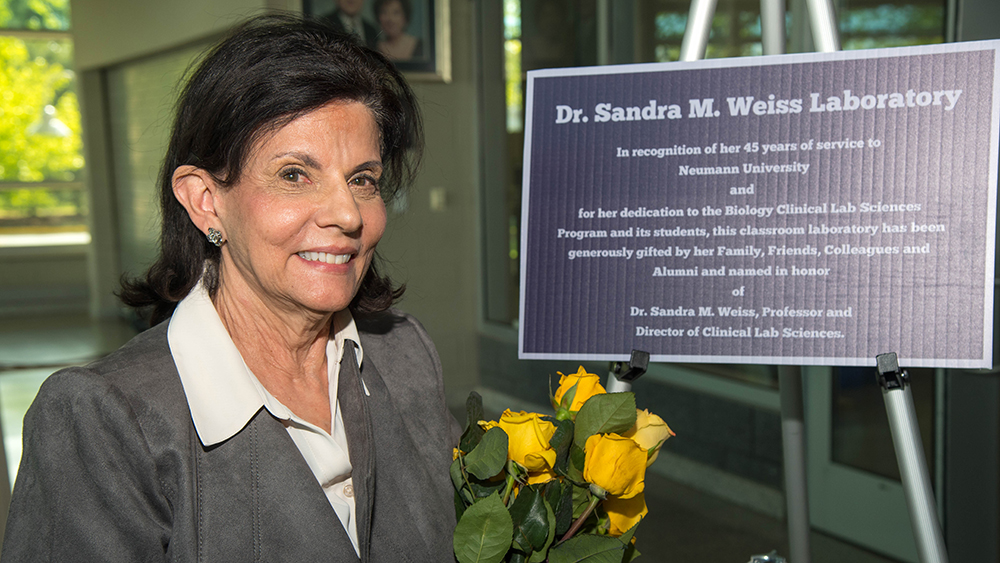 Neumann has named a laboratory classroom in honor of Dr. Sandra Weiss, who is retiring after teaching clinical laboratory science for 45 years.

A Chadds Ford resident, Weiss has spent countless hours on the third floor of the Bachmann Building in the laboratory that now bears her name. She came to Neumann in 1976 to teach medical technology and became director of the university’s Clinical Laboratory Science (CLS) Department in 1985.

Under Weiss’s leadership, the Biology/CLS program became one of Neumann’s most successful in terms of career preparation. More than half of her students have had job offers in hand before they graduate, and they have been hired by A.I. Dupont Hospital, Children’s Hospital of Philadelphia, Christiana Medical Laboratories, Einstein Medical Center, and the University of Pennsylvania Medical Laboratories, among others. Many immediately pursue advanced degrees.

According to Weiss, clinical laboratory scientists are experts who perform highly complex testing, such as tests for COVID-19, to assist physicians in patient diagnosis and treatment. They use sophisticated biomedical instrumentation and technology to perform laboratory testing on blood and body fluids.

Weiss describes her retirement as bittersweet and remembers her students fondly. “Most of the students who go into our program are the cream of the crop,” she explained. “The program is extremely rigorous, and they have to have a lot of self-discipline and motivation to keep up and see the light at the end of the tunnel.”

During her decades at Neumann, she has taught biology, immunology, human anatomy and physiology, medical science, and hematology. She has authored publications and presentations that deal with academic performance, learning style and student satisfaction; curriculum development for information literacy standards; and assessment of cognitive ability.

Weiss has won the Lindback Distinguished Teaching Award, Neumann’s Faculty Award for Growth in Scholarship, an Outstanding Research Award from the Pennsylvania Research Association, faculty development grants, and math and science grants from the Southeastern Pennsylvania Consortium for Higher Education. She also participated in a National Science Foundation grant to study teaching excellence in STEM secondary education and was selected for inclusion is the Trademark Women of Distinction 2020 Honors Edition.