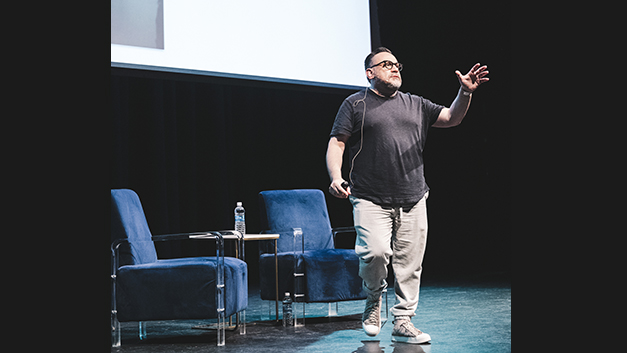 Entrepreneur’s Advice: Unprecedented Growth is Ahead

Leonard Brody sees patterns in history, and he thinks that awareness of those patterns can help entrepreneurs.

“The Achilles heel of entrepreneurs is not understanding historical context and cycles,” he told an audience of approximately 100 at his April presentation of the sixth annual Rocco F. ’79 and Mary A. Abessinio Lecture in Entrepreneurship and Management.

“We are living in the largest institutional and human shift in the history of our species,” he says. “It is a complete resetting of the operating system of our planet.”

These resets are significant events that change the way people behave. He identifies the first modern reset as the British Industrial Revolution in the 17th century. “Resets are usually caused by financial crisis, war, technology, or health events,” he explains. “The next will be caused by climate change.”

What businesses, governments, and nonprofits don’t realize is that, according to Brody, “resets are definable, repetitive, and predictable.”

"We are living in the largest institutional and human shift in the history of our species."

His research shows that resets are usually followed by a 9-to-18-month period of devaluation and then by a 3-to-12-year span of intense growth. As an example, he cites the 1918 Spanish Flu before a subsequent decade of economic expansion and hedonism, the Roaring ’20s.

Signs of a post-COVID boom, he believes, are already visible in the skyrocketing adoption of e-commerce and the complete redefinition of “the office” as both employees and companies recognize the benefits of working remotely.

“There is the infrastructure for entrepreneurship right now that has never been seen before,” Brody told students and faculty. “Have a theory of the world and drag others with you.”

He closed his address with a final challenge to budding entrepreneurs in the audience. “We’re approaching an unprecedented period of growth. What’s your move going to be?”

Leonard Brody is a Canadian entrepreneur, venture capitalist, best-selling business author, and a two-time Emmy nominee. He has helped raise millions of dollars for start-up companies, has been through one of the largest Internet IPOs in history, and has been involved in the building, financing, and/or sale of five companies to date.

In 2016, Brody partnered with Forbes to create The Rewrite, an award-winning series on the future of our world and the way that organizations can stay relevant and thrive. He counsels businesses and institutions to embrace the disruption caused by technology.

Brody is currently the co-founder and executive chairman of Caravan, a joint venture with CAA (Creative Artists Agency in Los Angeles), the largest sports and entertainment agency in the world.