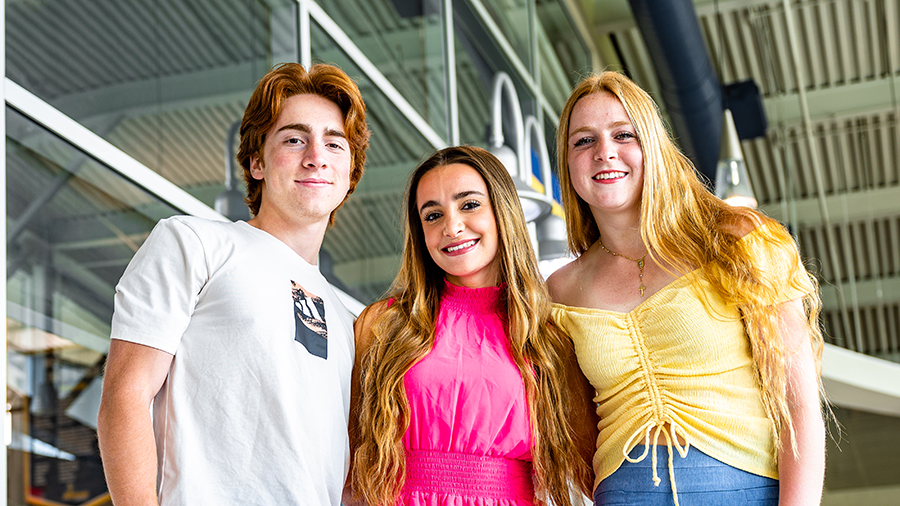 Troilo Trio Could Become a Quintet

Four years ago, Riabene Troilo’s campus visit was based on a series of flimsy circumstances. A neighborhood elementary school teacher offhandedly mentioned enjoying her graduate classes at Neumann. Then the family drove past a Neumann billboard on I-95. “Maybe we should take a look at Neumann,” Ria’s mother mused. “It’s close.”

Today, Ria is a brand-new graduate, two of her siblings are enrolled, and there are two more family members in the pipeline, all because of that serendipitous campus visit.

It was raining on the day of her scheduled trip, and she and her father arrived late. “Sean McDonald (director of Neumann Media) and Sean Spence (then a student) greeted me, gave me a private tour, and treated me like I was supposed to be here,” Ria recalls.

“I toured other beautiful campuses, but nothing felt like it was a fit for me. I got the feeling that this was a community, and I had a sense of belonging.”

Her on-campus siblings agree. Dariana, a senior next year, is an exercise physiology major, and Joe, entering his sophomore year, is a business finance major. “I love it here. Neumann has become my happy place,” admits Dariana. “Honestly, it’s hard for me to go home on weekends because I’ve just grown so attached to this university. I have great relationships with friends, teammates, and professors.”

“People are willing to help here,” Joe adds. “Professors really care about their students, and there are no big lecture halls with 100 students. Classes have 15 to 25 students.”

"I love it here. Neumann has become my happy place."

Regarding the expected sequence of five siblings to Neumann, Dariana jokes that “Ria was always the guinea pig.” She liked Neumann-Goretti High School, so all five went there. Next in line are Alura, who just graduated from high school and has already committed to Neumann, and Luca, a rising junior at Neumann-Goretti.

Mrs. Maria Troilo (TROY lo), mother of all five and an educator herself, is a self-described discerning critic of her children’s educational choices. She believes that Neumann is small enough to customize its students’ education in a caring way, yet ready them for a competitive global market.

“When your child is preparing to begin his/her college journey,” she writes, “you anxiously pack the bag with everything they may need, fretting that perhaps you may have forgotten something. You soon come to realize that there is no need to worry — Neumann University has already packed that bag for you!”

For Ria, that bag included preparation for a career in broadcasting. She is currently working two part-time jobs: production assistant at NBC10 (the 4:30 a.m. weekend shift) and a member of the Phillies promotion team. She has also held a job as a cheerleader for the Flyers during the last three seasons and completed several internships before her senior year.

“I was a shy, timid little thing walking in here,” she recalls, “and this environment has shaped me.” She points to extensive on-camera experience from her sophomore year and a television production class with Emmy Award-winning Leigh Pullekines, who directs NBC10’s 4 p.m. and 6 p.m. newscasts, as pivotal moments in her academic and professional development.

“Neumann is a catalyst for the success I’ve had. My goal is to be on camera and share my personality and sports mind with others.”

She is staying open-minded because the industry is so competitive but would love to land a job in her home market (she’s from South Philly) because of the connections she has already made.