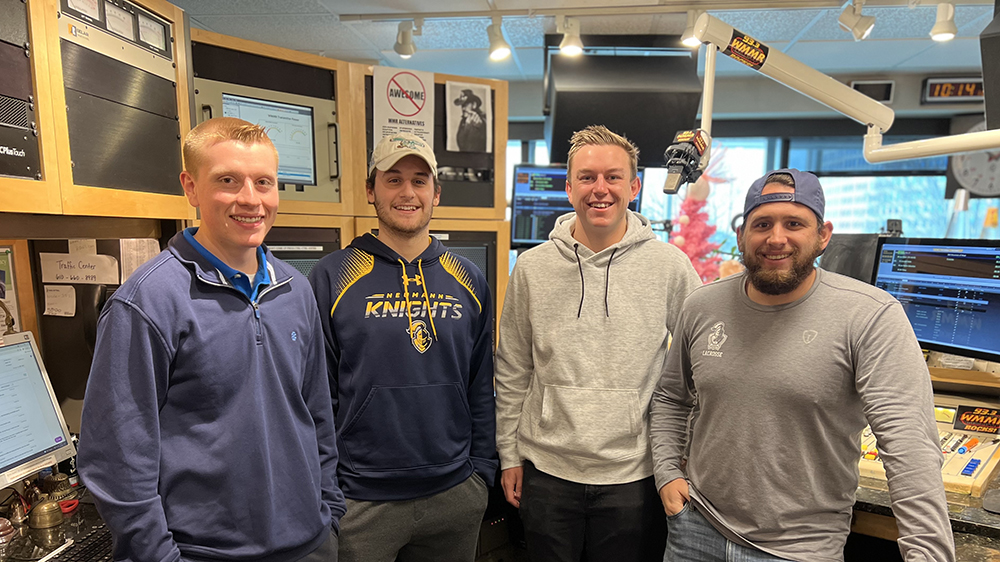 Through the past 14 years, Neumann University students have benefited from a relationship formed with one of the top broadcasting companies in the world – Beasley Media Group. This partnership was not developed by top NU officials meeting with the Beasley brass. It began with one very eager student looking to land an internship.

That student, now director of Neumann Media, is none other than Sean McDonald. When he was a student at Neumann, McDonald was looking for an internship. He stumbled upon one while picking up a prize he won from radio station WMGK 102.9FM.

As McDonald tells the story, he won $100 from the radio station and went to their office in Bala Cynwyd to collect it. A note was posted at the receptionist’s desk that listed an opening for a radio intern. McDonald, who was a computer information management major at the time, needed an internship and applied. He had been warned by his dean, Dr. Ardi Shahmaei, that he had one week to secure the internship, or he’d have to wait another semester.

Fortunately, all the pieces fell into place, and McDonald began interning with Rodney Byrd, a station engineer. He hit the ground running and soon began working on various projects like developing website streaming and building the transmitter site for another company station. Two months into the internship, McDonald was offered a remote broadcasting job. He also became a board operator for WMGK and WMMR.

Coincidentally, Neumann just built an internet radio station and needed someone to run it – enter McDonald.

"Through this partnership, students are getting exposed to the type of work they want to pursue."

Shortly after, he started bringing NU students with him to live radio events that he was working throughout the Delaware Valley.

But the big break for Neumann University, and NU students, came in 2015 when Byrd asked McDonald to video stream one of the most legendary events in Philly radio history – WMMR’s Preston and Steve’s Camp Out for Hunger. The event, which began in 1997, had never been live-streamed before.

“We showed up with about seven cameras. About 10 students put together a full on-video production, including recaps during commercial breaks of what (they) just saw so the audience had something to watch,” said McDonald. “Each year, it’s grown bigger and bigger. And through this partnership, students are getting exposed to the type of work they want to pursue.”

And pursue they did. Several NU students are currently working for Beasley. Connor Betts ‘16 is an assistant producer for the Preston and Steve show. Jake Loburak ’21 is a part-time videographer and Sean Spence ’20 works in the engineering department. Mike Ciaverelli ’19 produces streaming video for 97.5 The Fanatic, and senior Amanda Cunningham was just hired as a part-time remote engineer.

This partnership, created and cultivated by NU staff and students, has resulted in the university becoming the official sponsor of the Preston and Steve’s show live stream. The stream is posted every weekday to the station’s YouTube channel.