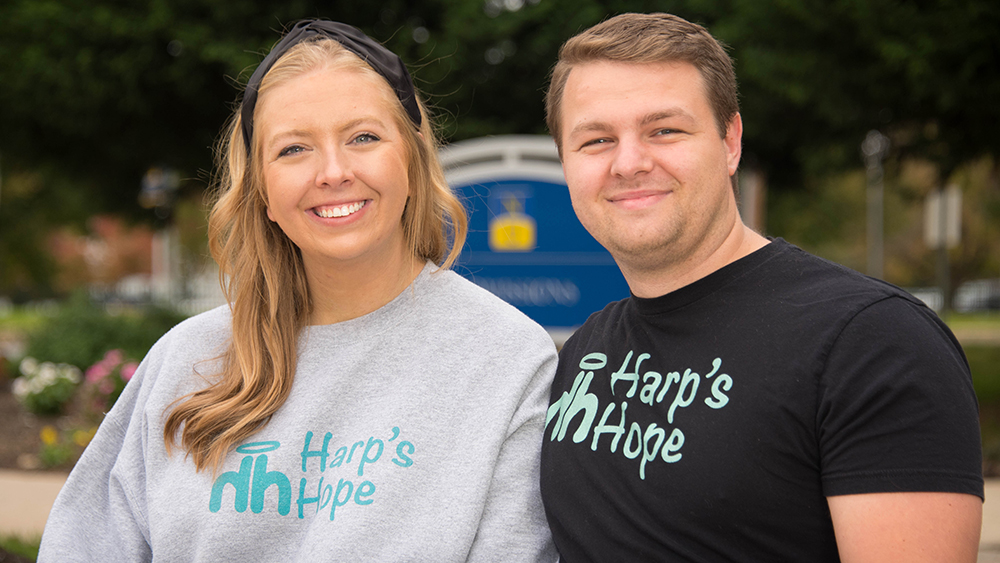 Turning Personal Loss  into a Lifeline for Others

The birth of a baby is truly a miracle and cause for a joyous celebration. Mike Forrest ’17 and his fiancé Kerri Klatcher ’17 experienced this joy when Klatcher’s sister, Lauren, gave birth to a girl, Harper Taylor, on January 29, 2020.

Tragically, Harper’s life ended only five days after she was born. This seemingly healthy baby developed a cough ten hours after birth and lost her battle to a blood infection despite heroic effort by the NICU staff at Nemours Children’s Hospital.

Forrest and Klatcher spent many days in the hospital, supporting Lauren and her husband Ryan during Harper’s short life. During this time, the two alumni noticed that other parents in similar situations did not have the emotional or financial support they needed while caring for a sick child in the NICU.

Forrest recounted a story about sharing pizza with a mom whose son was in the NICU at the same time as Harper. They watched the woman eat half of the slice and save the rest for her next meal.

“It really opened our eyes,” said Klatcher. “There are people who are single moms who have to do this all by themselves.”

Amidst their heartbreak and sorrow, they saw a need and knew what Harper’s legacy would be. The family’s goal became the formation of a non-profit with the mission to help other families with babies in the NICU. The non-profit, known as Harp’s Hope, was formed on July 20, 2020.

“There’s a lot of great peripheral services that hospitals offer but we fill in that niche for the in-between costs,” Forrest explained.

According to the non-profit, 10 to 15 percent of babies born in the United States spend time in the NICU. These families incur indirect costs such as transportation, parking, and food which average $60 to $80 a day.

Harp’s Hope raised $10,000 last year. Forrest volunteers as the non-profit’s director of finance, and Klatcher serves as the social media manager. When they’re not focused on their family cause, Forrest is a project manager for Daniel J. Keating Company, and Klatcher is a kindergarten/special ed teacher at the Philadelphia Performing Arts Charter School.

Forrest and Klatcher welcomed Harper’s brother Reid to the family in February 2021. In addition to spending time with baby Reid, these two alums are also getting ready for their wedding on March 12, 2022.

To learn more or to donate, visit Harp’s-Hope.org and Facebook @harpshopeorg.