Jesus said to his disciples: “Do not let your hearts be troubled. You have faith in God; have faith also in me. In my Father’s house there are many dwelling places. If there were not, would I have told you that I am going to prepare a place for you? And if I go and prepare a place for you, I will come back again and take you to myself, so that where I am you also may be. Where I am going you know the way.” (John 14:1-4)

This verse from today’s Gospel reading was a verse that gave me hope when I was very young, and moved me, when I was older, to explore faith traditions other than my own. Here at Neumann University, I have been involved in InterFaith activities, and occasionally taught the World Religions class. So how was I formed, to want to peek outside the garden? 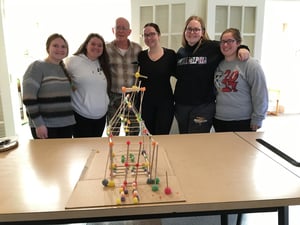 When I was in Roman Catholic elementary school in the 1950s, I learned in our religion class a very narrow interpretation of the Roman Catholic Church’s teaching, “Extra ecclesiam nulla salus.” Translated as: “Outside the Church, there is no salvation,” a teaching that is also very much based in John’s Gospel reading today, “No one comes to the Father except through me” (Jn 14:6).

This teaching was very upsetting to me because although I had three grandparents who were Roman Catholic, I had a grandfather who was Methodist. Since the narrow interpretation of those days was that “Church” meant Roman Catholic Church (and possibly the Byzantine Catholic churches), I was felt conflicted. I loved my grandfather very much; he was a schoolteacher and later a high school principal. He would drive my grandmother to the local Catholic Church on Sundays, and wait outside in the car for her until Mass was over. I just couldn’t understand why he would not be able to go to Heaven, I couldn’t understand why many of my non-Catholic friends would be unable to experience Heaven. At the same time, I believed that God loves all of Creation, all of humanity. So, this contradiction was my burden for a few years.

With the Second Vatican Council in the 1960s, which was occurring while I was in college, there seemed to be a shift on this teaching, and “Church” seemed to be more broadly interpreted as the Mystical Body of Christ, and not narrowly as the Roman Catholic Church. Elements of the Council were formed to work on "Christian Unity,” and to reach out to non-Christian faiths as well. Interfaith and inter-religious events were commonplace. It was at this time that I believe the Holy Spirit led me to Temple University, via St. Josephs College, and the Canons of Premontre (Norbertines), to study a focus on comparative religions.

It was about this time, I think, that I heard a very simple story that greatly brought home today’s Gospel reading:

You see, a man died, and went to heaven, and Saint Peter was showing him around some of the dwelling places in heaven. In one place, people were jumping and dancing and shouting, and the man looked at St. Peter quizzically. “Oh,” said Peter, “this is the Free Methodist heaven.” In another dwelling, people were sitting stiffly on wooden benches, listening quietly to the preacher. Peter said, “This is the Presbyterian heaven.” At the next dwelling, the man saw bearded men reclining on couches, being served all varieties of fruit by beautiful women. Peter said simply, “This is the Muslim heaven.”  At the next dwelling, the man saw bearded men with earlocks, little boxes on their foreheads, and tassels on their shawls, dancing with scrolls. “This is the Hasidic Jewish heaven,” Peter said, “they are celebrating God’s gift of Torah.” “Well,” replied the man, pointing to a very high wall, “this is all good, but what is the dwelling over there, behind that wall?” “Oh, that” St. Peter whispered, smiling, “that’s the Catholic heaven. They think that they’re the only ones up here.”

Reflecting on this story helped me to put things into perspective. God is the Great Mystery, and no amount of theology can explain the Almighty. What we can do is to rejoice in God’s Creation—all God’s creatures—and learn about each other, from each other, and with each other, as we build relationships, trusting in God’s Goodness and Mercy.

About The Author: Vince is the Disabilities Services Coordinator in the John C. Ford Academic Resource Center and an Adjunct Professor, and resides in Paoli, PA with his family.