I have always known that I was a people person. I had no problem talking to strangers, conversing with people anywhere and everywhere. In hindsight I can see that this probably troubled my parents but now my family and I could agree that being social has led me down a pretty fulfilling path.

I remember doing service my whole life by following the example of people around me. I chose to continue doing service as an adult when I decided to attend Neumann University which had a deep focus on service learning. 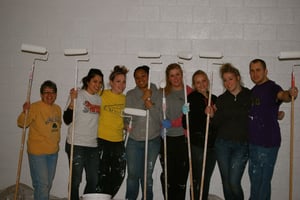 In my first year, I hit ground running with events and experiences. Through campus ministry, I traveled and completed service in so many different areas with so many different people. I worked on Indian Reservations, in different cities, and helped rebuild areas in need. I continued planning service projects while attending Neumann, which deepened my love for reaching out to those most in need.

After college, I ran into a personal crisis of not knowing how to give back to a new community as an individual and without the comfort of Neumann’s campus ministry. I believe it was through the works of the man above that I was reunited with a fellow Neumann Alumna, Bettsy McKlaine (Director of Adult and Graduate Admissions, Neumann University) who had a similar dilemma. We joined forces and came to the consensus that young people like ourselves were struggling with faith, spirituality, and the ability to give back to a community. With this basic idea and a lot of hard work, we developed a group called Sneham, meaning love in Malayalam (South Indian Language). 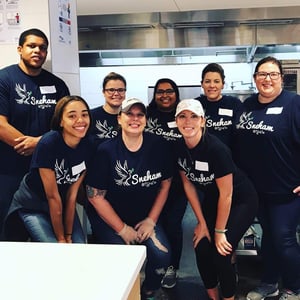 Now Sneham members are provided with various opportunities to deepen their roots of faith and spirituality as a community while also providing services all over Delaware and Pennsylvania through volunteering. Sneham and its members are constantly expanding and growing each year which is more than Bettsy and I had every hoped.

I was honored to take the lead role as the service coordinator for Sneham. My main task is to locate areas of need and members of the community that require support. I work to build relationships with larger groups that allow Sneham to collaborate on a greater scale within needy areas. This is a major role to play because I also have to work a full time job! Thankfully someone once told me that volunteers get paid by God and I figure that is good enough!

The desire to serve and locate areas of need led me to follow a personal dream of outreach in Kenya. Through the organization International Volunteer HQ, I traveled this summer to Africa independently and worked for 2 weeks in the Naivasha Slums. I was placed with a host family and learned quickly how to adapt and live without luxurious things like consistent water and electricity. My days were filled working at the Kitendo Children’s Charity (KCC) pre-primary school. 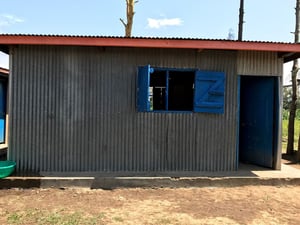 The school was located within a few hundred feet of the local slum from which the children who lived attended the school. In the three-room school house I assisted in food preparation using a fire as a main cooking source, I co-taught with the local teachers whose main language was Swahili, and I led a group of local volunteers in repairing parts of the school and classrooms that were damaged due to the weather and lack of insulation.

Before going to Kenya, I had an idea of the things I would see and experience but I quickly learned that the conditions and way of life there were simply unimaginable unless seen firsthand. I witnessed children who had ripped clothing and drank brown water, yet shared a piece of candy that they received without hesitation. I learned so much from watching adults skillfully work and produce incredible goods with little-to-no resources. 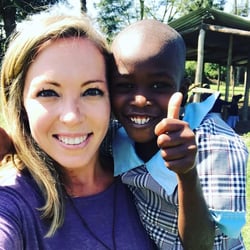 The perspective that I received while in Africa showed me how simple life and living could be. The experience proved to me how people can have little yet be filled with so much joy and love for what they do have and who surrounds them.

Living a life focused on service in the United States and abroad has shaped me as a person, allowed me to grow in my faith, and has brought me closer to the fulfillment that I believe God is leading me toward.

About The Author: Lilly is an elementary school teacher and currently lives in Newark, DE.